You will be surpriesd to know that the first experiments of Angadia service was made by Sheth Himabhai in Ratanpol. At present, Ratanpol is like the head quarter of the Angadias. the old Angadia traditions is converted into 'Courier service' now.

Business: A Way of Life

Commerce and Industry is a way of life in Ahmedabad. Among various reasons for the development of commerce and Industry, one main cause is the inborn business mentality of an Amdavadi. In all activities and discussions, Amdavadis have the enthusiasm of earning money above all. They worship the goddess of wealth - Laxmidevi as well as 'Kuber', the lord of wealth.

Today, the city has become outstanding for manufacturing medicines and detergents. This is a city that is truly globalised. A buoyant economy and disposable income have driven the reality boom in the mega city, Ahmedabad. Ahmedabad means "where business is a wayof life".

The fifth richest city in India is now Ahmedabad, ahead of Bombay and Delhi, and miles ahead of Calcutta.

Ahmedabad - where business is a way of life.
Amdavadi have inborn business mentality

Ahmedabad was well known for its business of cotton, silk and embroidery. The European countries used to buy 'Khinkhab' from ahmedabad to gift to the Queen of England. Ranchhodlal Chhotalal was the first man to establish textile mill in Ahmedabad in 1861. Second textile mill was started by Bechardas Ambaidas Lakshkari in 1867. Later, Mansukhbhai, Manganbhai and Lalbhai followed them. Later there were 26 mills in 1889, 53 in 1916 and 74 in 1934. Thus, Ahmedabad reached the peak of glory in textile industry and it became the "Manchester of India". The prosperity of Ahmedabad depends on the textile industry. Then Ambalal Sarabhai, Kasturbhai Lalbhai and Amratlal Hargovindas became the leading Textile industrialist and they followed Mahajan tradition. In the course of time depression was seen in textile industry and the mills were closed one after the other. This is how, a full stop came in the Textile Industry.

The prosperity of Ahmedabad textile industry is because of the stock exchange. When the first textile mill was established, shares were issued to raise the capital for the industry. Sheth Ranchhodlal issued the shares for raising the capital of one lakh rupees.

The businessmen of Ahmedabad established "Ahmedabad Share and Stock Brokers Association" in 1894. Thus the buying and selling activity was done in Manekchowk. In 1916 'Share and Stock Brokers Hall' was built at the cost of three lakhs and eight thousand rupees. This buildings is out of use at present, but it reminds us of the share market with bullish trend. The time has changed now.

Uttambhai Mehta entered the pharmaceutical industry in 1959 and today we find a big industrial complex of Torrent Pharmaceutical. There are many other pharmaceutical companies in Ahmedabad.

India is amongst the biggest in the world for the industries producing household goods. Presently, Ahmedabad enjoys top position in detergent industry. Out of the total production of detergents in India, 52 percent share is of Gujarat alone; with Ahmedabad accounting for 90 percent of Gujarat's production.

Nirma Limited is a clear leader here, accouting for 80 percent of Ahmedabad's total production, Today, Nirma is the largest detergent and second-largest toilet soap brand in India. Distinct market vision and robust infrastructure have resulted Nirma Ltd to sustain its dominant market leadership position it attained in 1980s. The founder of Nirma, Dr. Karsanbhai Patel is famous as 'Soap King' in the world.

Gautam Adani established a company called Adani Export Ltd in 1988.A shining star of the trade market, Gautam Adani created a business empire of 3300 crore rupees in a short period of one and a half decade and has earned 15th rank as a big business house. The first private port, 'Gujarat Adani Port Ltd' is established at Mundra in Kachchh by this company.

Shah Alloys Ltd (SAL) which initially started as Shah Industries in 1983 has become a leading stainless steel company of India. The Chairman of the company, Rajendra Shah started his career in Saraspur and has taken SAL to the peak of its success.

Rasna is very popular soft drink powder, manufactured by Ariz Khambhata. The success of Rasna has become a subject of case study for many business schools.

Vagh Bakari Tea is a popular tea brand in terms of quality. Narayandas Desai was the first to start tea estate in South Africa in 1892. Piyashbhai Desai developed this business.

In earlier days, some markets started in the walled city of Ahmedabad, exist even today and they are famous still. Let us learn about some of those markets.

A market held under the open sky, on the banks of Sabarmati every Sunday, is known as Gurjari Bazaar. It has remained equally popular among the common people. During the rule of Sultan, around 1442 AD, a bazaar was held between Manekchowk-Pankornaka every Friday. After that, it was held in the Karanj square near Teen Darwaja (Maidaneshah).

Because of the traffic problem in the Karanj area, this Friday market was shifted to an open space opposite to Sardar Garden behind. the mosque with Sidi Saiyed's Jali.And finally this market began to be held in the bed of the river at the end of Ellisbridge on Sundays. Ahmed Shah Gurjari Association is looking after the management of Sunday market since 1944. This market is such that a poor man can purchase the old or new household goods within his budget.

Manekchowk, which enjoys the status of the heart of the city, has its own glory. There is a Samadhi of Maneknath in the middle of Manekchowk. It is a popular belief that this area is known as Manekchowk after Maneknath. This market has numerous jewellery shops, as well as shops for gold, silver, diamonds and precious stones.

There are many other shops in Manekchowk. When the shops of Manekchowk are closed, the street is converted into "Open to sky restaurants". Today shops of gold and silver ornaments are found in many other newly developed areas, but no area can substitute Manekchowk.

The street that links Relief Road and Gandhi Road is called Ratanpol. This is the place where one would like to take a stroll to see things around or to pass time and buy garments of attractive designs.

You will be surprised to know that the first experiment of Angadia service was made by Sheth Himabhai in Ratanpol.At present, Ratanpol is like the head quarter of the Angadia.The old Angadia tradition is converted into 'Courier service'

Marketing of the textile good produced in the mills was looked after by the wholesale dealers-mill agents. Merchants from all over the country visited Ahmedabad to purchase cloth. The agents used to help them buying clothes from the mill agents. During the golden period in textile industry of Ahmedabad, Saiyed Ismail Maskati built his own shopping centre in 1906, which became popularly known as Maskati Market.

It is believed that during Mughal period or even earlier, this place was used for the factories of making shields (Dhal). So it is known as Dhalgarwad (The place where "Dhal" is made). The triangular shaped zigzag market of Dhalgarwad is a full fledged cloth market.

Dabgarwad is the place where drum beats are constantly heard. This area is known for the business of drums and tablas. 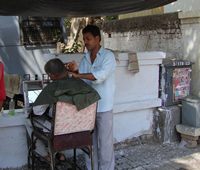 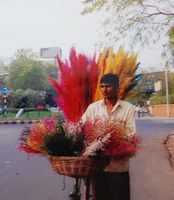 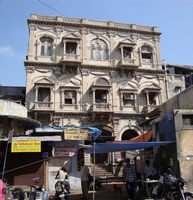 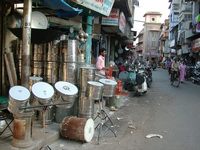 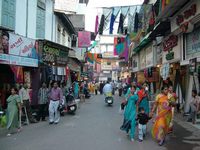 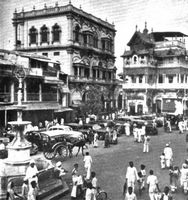