There are many popular legends about Ahmedabad. The citizens recall these legends in their daily life, though they do not have any historic evidence but they bring out the spirit of sacrifice and devotion existent in Ahmedabad.

Once there was a war between the gods and the demons (Reference-Puranas). Indra, the king of Gods was advised to make the weapon Vajra out of the bones of a sage to kill the demon-Vatrasur. When the sage Dadhichi, living in an ashram on the bank of river Sabarmati, came to know about it, he sacrificed himself for that noble cause. The trait of selflessness and renunciation has been, thus, associated with the citizens of this city since that time. 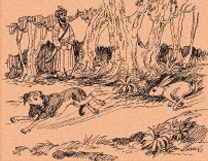 The Legend of a Rabbit

Sultan Ahmed Shah stayed at Ashaval while returning to Patan from South Gujarat. One day, on a hunting expedition along with his companions he reached the farthest corner of the forest. Suddenly, a rabbit behind the bush came forward and frightened the hound of Sultan. The Sultan was amazed to see this and tried to link this incident with the potential and mystery of river Sabarmati. There after, Ahmedabad was made the capital of Sultan Ahmed Shah.

The Legend of Teja

Asha Bhil was the Thakor (Duke) of Ashaval. He had a very beautiful daughter named Teja. When Sultan Ahmed Shah heard about her beauty, he thought of acquiring her. He reached Ashaval with his troops and demanded a big amount as Nazraana(token) from Asha Bhil.On expressing inability, he was asked either to fight or marry his daughter Teja with the Sultan. Initially, he was reluctant to this condition and thought of family suicide. Later, on his wife's advice, he agreed to marry his daughter with Sultan Ahmed Shah.

After that, Ahmed Shah never returned to Patan, but stayed at Ashaval. And in a course of time he established a new town called 'Ahamdabad'. 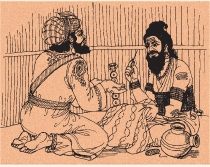 The Legend of Baba Maneknath

When the Sultan learned about Baba Maneknath, he requested him to show other miracles. Maneknath told him that he was able to enter into Karavada (a jug) and come out from the narrow pipe. When Maneknath entered into the jug, the Sultan closed the jug from both the sides. Thus Maneknath was captivated by the Sultan deceitfully. Maneknath was made to realize his mistake for incompletion of the fort wall. He then promised to the Sultan that he will not interfere with any construction work.This is how, the first dome was named 'Manek Burj' after him, which is now renovated. 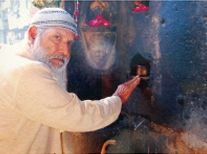 It is believed that Sultan Ahmed Shah had performed a yagna through the Brahmins near Teen Darwaja for the welfare of the citizens. The flame of the lamp which the Badshah lighted in a small recess of the wall is still unextinguished. At present, Shri Jafarbhai Mirza is taking care of the burning lamp Since the last seven decades. He considers it to be his inherited family duty to keep the lamp lightened forever.

The Goddess of Wealth

According to one legend, the Goddess of Wealth, Laxmi still lives in the city. It so happened that long back, she wanted to leave the city through the gate of Bhadra Fort.But the watchman-Siddique Kotwal was wise enough to identify her significance in the city. So he requested her to wait Until he returned with a formal permission from the Badshah. He then decided to behead self. His sacrifice thus had made the Goddess wait for ever in this city and retained wealth everlasting thereby.

It is believed that the tomb seen near the gate of Bhadra Fort is that of the watchman Siddique Kotwal who sacrificed his life for the welfare of the city. The goddess of wealth Laxmi Devi is seen in the garden opposite to Bhadra Fort.